South Benfleet School was opened on its current site on April 9th 1926 as an ‘all age’ school, to serve the educational needs of the whole of South Benfleet. 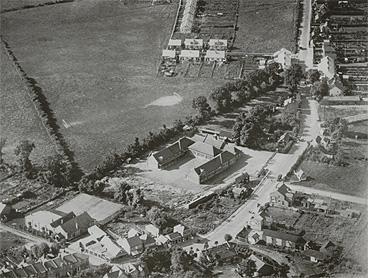 The school was built to replace the 'Old School' situated in School Lane near the station (now a car park!). In 1930 the Infants were reorganised into a separate school on the same site. With the post war reorganisation under the 1944 Education Act and the opening of the King John Secondary School, the Junior School concerned itself with the education of children between 7 and 11, and the Infant School with children of 5- 7 years.

In 1984 the two schools amalgamated to form South Benfleet County Primary School. In September 1993 the school acquired Grant Maintained status, ending local authority control but still leaving the school in the state system. In 1999 the school’s status changed again, this time to Foundation. In 2011 the school acquired academy status.

The Governors retain ownership of the building, employ staff and act as the school’s admissions authority.

This aerial photo was taken we believe just before World War 2! More old photos and information can be found by following this link to the Benfleet Community Archive http://www.benfleethistory.org.uk/category_id__46.aspx?path=